When we sell this house, the thing I will miss most is the wildlife. And I don’t mean the squirrel that came inside the other day, or the civets in the ceiling, either. I mean the stuff outside in the garden.

Like these fellas below. Well they have been known to come inside too, and then dash around like a freaked out cat, flinging themselves a couple of metres up the walls before they realise they can’t really climb flat vertical surfaces. I have been trying to photograph them for years. The trouble is they live at high speed, fuelled by adrenaline and sheer terror. Well, I guess you’d live that way too, if you were just the right size morsel for an active cat and you live mostly on the ground. The sight of me inside the house – let alone outside – is enough to change them into low-flying objects with no visible means of support. 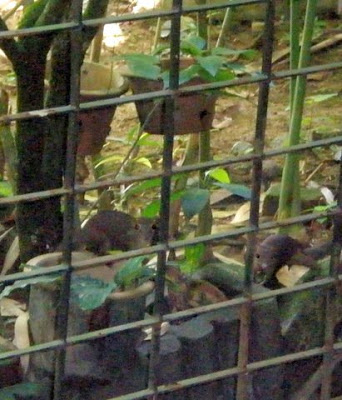 This morning I managed to snap them from inside the kitchen, through the open window when they were on the other side of the verandah 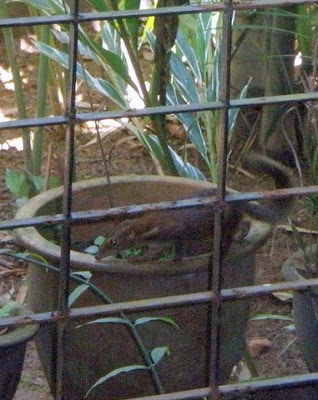 Nope, they aren’t rats or squirrels and they are not related to either. They aren’t even rodents. They have pointed teeth and a very ancient lineage. They are called Treeshrews, whhich is one of the worst misnomers you could think of seeing they don’t live in trees (although they do climb) and they aren’t shrews. 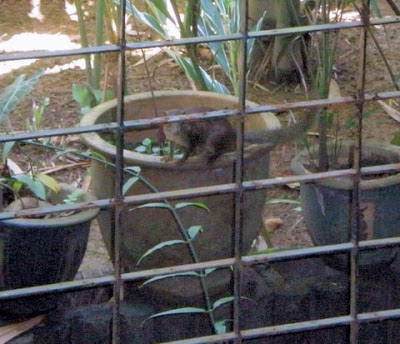 They are probably the most common of garden animals here in Malaysia, and yet in the national language they are described with the same word as “squirrel”, a family they don’t belong to and are not related to.

Sorry about the lousy photos – hard to get them to stand still for a split second.

They are insectivores, although they do eat just about anything small that moves, and will eat fruit too. You can distinguish them from most squirrels here by their pointed snouts.