The lake has been in the papers a lot the last couple of days, with many protesting its pollution and degradation, saying the polluters ought to have to pay.

The Pahang River is a flowing brown sewer of mud and poisons – and it all flows into Chini Lake during the wet season. And tell me, where is the public and political and commercial will to actually do something about all that? Or, in fact, about any of that?

If you are a Malaysian, have you even done the very minimum and joined the Malaysian Nature Society, supporting the people who try to do something? Or are you going to shrug and say, “Who cares? Let my kids deal with it when they grow up?” One year’s membership will cost you less than the price of one buka puasa in a K.L. hotel … and you know what? Not even as many as 1 person in every 10,000 Malaysians bothers to join.

This is from a letter in today’s The Star newspaper from someone who used to go to Tasek Chini regularly some 15 years ago:

It was beautiful then – clean waters, beautiful plants and great fishing. (….)
On the way back, on the small stream that led to the Pahang River, we had the shock of our lives. In the distance we heard a very loud splash in the water heading our way. It was so loud and scary that my hair stood on end. When we got near, we noticed that it was hundreds of huge Toman fish heading upstream, feeding on the smaller fish…

Here is the small clear stream he speaks of, once one of the most beautiful rivers in the world until most of the big trees were killed by mismanagement of the river for tourism: 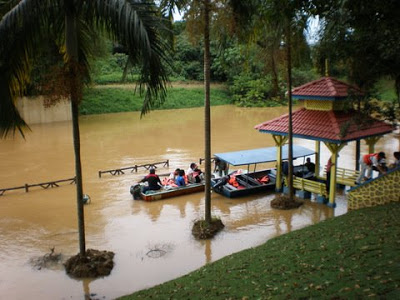 Not much chance of seeing any fish in that, is there?