Sometime tomorrow I will finish yet another rewrite of Rogue Rainlord (or whatever the final title is!).

And this is absolutely the last draft.*

*{Er, well, sort of the last – there’s still an editor’s suggestions to be incorporated (if I ever sell the thing) and then the copy editor’s corrections and then the final proofs after that… Maybe I had better say this is the last of the writer’s drafts.}

I sometimes get asked: How do you know when it’s ready? After two re-writes? Ten? Thirty?

The answer for me is none of the above. I know it is ready when I get bored.

It’s been put away and allowed to jell several times, then re-read and found wanting. It has been rewritten and fixed and cut and added to and rearranged. It has been tightened and polished and read and corrected yet again. How many drafts? I haven’t the faintest clue. Numbers mean nothing; what counts is getting it right. And until I get it right, I can’t leave the darn thing alone. Some time back I got it structurally right and breathed a sigh of relief; now I have the polish right as well.

And I know that I have it about as right as it will ever be, short of having professional editorial input. How do I know? Because I am bored. Why am I bored? Because finally I can’t find much to fix. This is the way it is meant to be. This is my story and it is good. I love it. And I now find myself reading it as a reader, not as a writer – but it is a book I have read so many times over the past few months that it has no surprises any more. I have reached the stage where I have to let go, move on. I’ve no idea how other writers arrive at this decision, but for me, boredom means success. The first goal has been reached…

{Of course, when I have editorial input, I shall get itchy fingers again and there will be lots more polishing…}

And the good news is my agent has now read it (the version before this one) and has said that she thoroughly enjoyed it, thinks it is great stuff, and still finds a certain scene shocking, even though she read it before in a still earlier version.

Yay! She has no hesitation in sending the MS off. 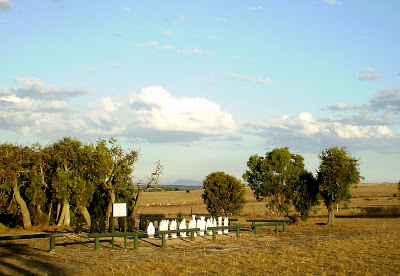 Pix:
How’s this for style? A public chess set in a cow paddock, just outside of Esperance. Love it.

Is the fence to keep the bovines from trampling the pawns or to make sure they don’t dribble on the players?

I have distinct memories from my childhood of a cow called Corrie who hated kids, and me racing down the driveway with her lowered horns just inches from my behind. Pamplona and running with the bulls? Yep, been there, done that, and I was only five. I dived through the neighbour’s barbed wire fence.