…at least, not in the wild.

Which seems to have disappointed a few people judging by the comments section of a couple of the previous posts – hey guys, they have very big teeth, you know!

Tigers are rarely seen in Malaysia, at least not healthy wild ones. If they should encounter you, they are much more likely to sneak around and watch you, rather than the other way around. That’s the scary bit.

I have been very, very close. Too much so. Years ago when my children were small, we were walking down a track in the National Park (Taman Negara) to one of the caves. We didn’t stay long. About half an hour later we walked back over the same track, only to see unmistakable claw marks on the trees and smell unmistakable scent marks that had not been there a few minutes earlier. The tiger, upset that someone had encroached on his territory, had done his best to reclaim it after our passing. Nowadays, there are far too many tourists using that same track for tigers to put in an appearance.

And once down in Endau Rompin National Park, also many years ago, we were sleeping on cots under a strung up canvas roof. I was on the end cot, with just a mosquito net between me and the forest… One of the other birders and I rose before dawn to walk one of the trails and listen to the dawn chorus. We hadn’t gone very far when there was the strong smell of tiger (imagine the scent of 20 dirty tomcats in one place…) and about 50m from camp in a muddy patch we found a tiger paw print. My jaw dropped. Those paws are HUGE. Dinner plate size, you know, the really, really big ones.

Not so very long ago, on one of my projects, we disturbed something as we walked down a logging track. The vegetation screening the track was very thick – like a wall – and from behind it, just a metre or two away, came a rough cough. We didn’t see anything, but we all knew that tigers don’t growl in warning, they cough. Dennis Yong, who was with me at the time, and has heard tigers cough before, said it didn’t sound quite the same…but he didn’t sound quite sure, either. Whatever it was, it was much too close. 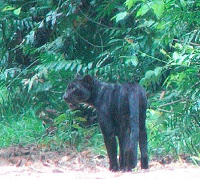 Another time we were camped in the middle of a peat swamp. We had arrived by boat at about the only bit of cleared and dry-ish land in the area and pitched our tents. Except for Dennis. He preferred to sleep up on the high platform of the abandoned and rather ricketty aboriginal hut there, accessible only by a perpendicular ladder. I was wondering about that…when we found on the edge of the clearing, a scat containing the remains of a monkey. Ok, how many animals are large enough and carnivorous enough to eat a monkey? And which cat is the only feline that doesn’t cover up its scat? That’s right: tiger.

You know what? I made darn sure I never got up in the middle of the night to go bush…

The pix shows my one encounter with a big cat – a leopard/panther (which in Malaysia is usually black so it is very difficult to see the spots).

Photo (copyrighted) by Lim Kim Chye, taken during the course of a project funded by UNDP/GEF/under the auspices of the Malaysian Govt and Wetlands International.