↓
Home Menu ↓
Skip to primary content
Skip to secondary content
Home→Blog→Blog→And I thought my trip across the Pacific was a marathon? 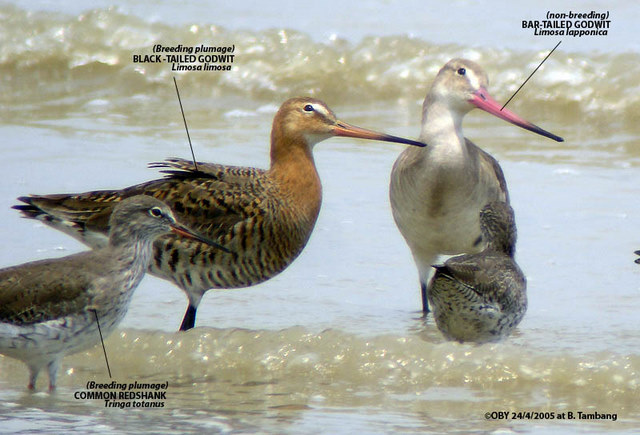 With improved battery technology, there has been some success recently in tracking migratory waders. Here’s the journey of a little lady unromantically called Bar-tailed Godwit N7. [She stands maybe nine inches (22 cm) tall – that beak is 3.4″ (8.6 cm) long.]

She had a summer holiday in New Zealand. I mean, who wouldn’t want that, when the alternative is spending the winter up in Alaska? She was fitted with a satellite transmitter while there, which apparently didn’t trouble her, because in March she popped over to China, near the Korean border, for 5 weeks rest and gourmet dining. A New Zealand to China non-stop flight lasting a mere 7 and a half days, travelling at an average speed of 56 kph (34.7 mph). No wonder she was hungry enough to stay 5 weeks enjoying Chinese food.

She then travelled on to Alaska, probably for some sex and family time. She stayed a couple of months, but winter doesn’t look too good in that part of the world, so she headed off to New Zealand again at the end of August. More or less south. She doesn’t think much of Hawaii or Fiji apparently, because she declined to stop. Nothing like non-stop flights…for 8 and a half days.

She’s now back in New Zealand. Having flown over 29,000 kms (18,000 miles) this year – or 500 hours of flying time. Pity she can’t sign up for a frequent flier programme…
…and I have the cheek to complained about 37 hours to get back to Kuala Lumpur from USA? And I didn’t have to flap my arms, either.

Photo courtesy of Ooi Beng Yean, one of Malaysia’s most talented bird digiscopers. Please do not use without permission from him.