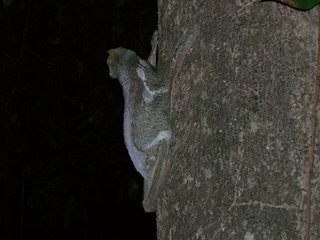 But first let me show you the answer to yesterday’s wildlife trivia. The answer is a Colugo. Also known (erroneously) as a flying lemur. It’s a herbivore mammal that flies (well, glides actually) using a membrane that stretches from the tail via back and front legs to the sides of the neck. 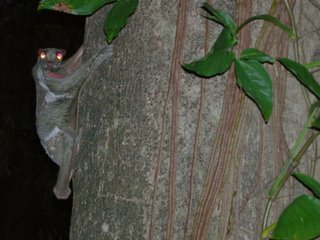 And now for the nice things that happened today. Well, first I realised someone posted 3 rave 5-star reviews on Amazon for the 3 books of The Isles of Glory, which is always nice.

(OK, I know one is not supposed to put any store by Amazon reviews – they are all supposed to be written by one’s mother or best friend or something, right? And I promise you, once I am hugely famous and no longer need the reassurance that someone out there likes my work, I’ll stop reading them… Until then, bless you, you Amazon reviewers. I love you all. )

Next my Australian editor, wanting something to put in the 2007 sampler, read the new first chapter of The Song of Shiver Barrens (the old first chapter was totally scrapped) and seemed to like it enough to use. I’m a little embarrassed as it is only a day or two old and not polished, let alone copy edited! Still, I feel I must be on the right track.

And just a few minutes ago, my lovely agent (may she be showered with blessings in 2007) sent me an email detailing another offer for yet another foreign language version of The Isles of Glory to be published 2008.

In Trade first, then Mass Paperback. My first TRADE!! Eureka!

Major publisher in a major language. (Having once had an serious offer from a Big English Language Publisher that later fell through before signing, through no fault of either mine or my agent, I am not saying more than that, but believe me, I am already grinning from ear to ear on this one. ) Yay!!