↓
Home Menu ↓
Skip to primary content
Skip to secondary content
Home→Blog→Blog→Fitting in: how hard should you try?

In Heart of Mirage, the main protagonist grows up thinking she fits in to her adopted world. She is well educated, wealthy, respected. Yet she is also aware that she is different – not the kind of person you would want marrying into your family, for example. She is not looked down upon because of her skin colour and appearance so much as because of the work she does. In fact, she chooses to live on the fringe of her society because of it.

When she returns to the land of her birth, she finds herself an outsider again. Here, she looks right, but is culturally different. She tries to fit in, but finds it tough. She starts to question all the things she had once believed were admirable…

I grew up in a small farming community on the outskirts of Perth, Australia. The primary school I attended had two grades to a classroom, it was that small. And not far away, the government built a migrant camp (as they were called in those days) where immigrants lived until such time as they found work and homes. The year I started school was 1950, and my classmates had names like Ludwiga, Tosia, Gunter or Vladimir. Many had been born in DP camps at the end of the war, and had never known a proper home life. Their parents had lived through hell. I remember my mother’s Country Women’s Association made a visit to the camp to make the first batch of women feel at home – and all the women ran away and locked themselves inside the Nissen huts. Who knows what fears they had…

I remember a girl called Elisabet. She must have been about six. Every day she stole the little iced biscuits my mother used to pack in my brown paper bag for my school lunch, until I complained that my sister had biscuits, why didn’t I? I was very indignant when I found out what had been happening to them, until my mother – who was a wise woman – told me that Elisabet had never had anything sweet to eat until she came to Australia. That sounded so awful, I was prepared to give her all my biscuits thereafter.

I remember how we Australians used to giggle because in winter some of the migrant girls used to wear trousers under their dresses, or tights, which we thought was very odd. They did their hair differently too. And wore earrings in pierced ears! No dinky-di Aussie did that. They had weird food in their lunch bags. Sometimes they themselves smelled funny. (We were proudly fifties-Australian and never ate garlic….)

Were we cruel? No, not intentionally, but I doubt that we were exactly kind, either. Like most kids, we were uninterested in those who didn’t conform, and quite willing to poke fun at them. As they grew older and became more Australian, we were also willing to be best friends. We embraced them because they changed, not because we embraced the difference.

Australia did alter because of them. We all eat garlic now! And they changed because of us. I remember meeting Ludwiga when we were both in our twenties. She was Louisa then, and completely indistinguishable from any Oz-born woman of her generation. Her children would never speak Polish, or eat Polish sausage, or have Polish names. She’d learned her lesson young. 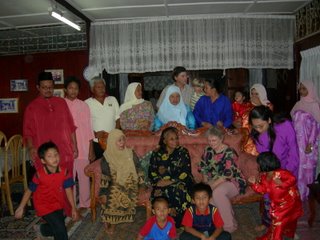 How much should an immigrant change to fit in? How much should they hang on to their cultural integrity? Does Ligea in Heart of the Mirage betray herself, her adoptive country or her birth nation? Or all three? Does she fit in anywhere?