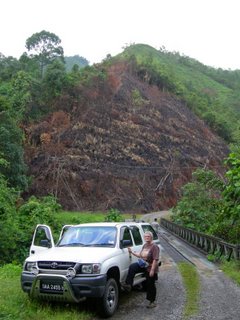 We head out from a town called Kota Belud to the western slopes of Mt Kinabalu (we’re on our way back to return the stolen sheets, remember?) pass by an army camp called Camp Paradise (someone had a sense of humour) and on to a bone jangling road heading for Sayap village.

Towards the Park, the mountains become steeper – “pointy hat” peaks like those in fantasy maps done by artistically-challenged authors. They are often cleared for agriculture — and pineapples and hill padi are now planted all over the burned 60° slopes (this all part of the burning that Malaysia refuses to acknowledge responsibility for, let alone consider contributes to the annual haze-hell of the region).

The hill-top village of Sayap has a maze-like conglomeration of houses, a church/community hall and village shops. It is prosperous, now enjoying both the high price of the rubber they tap, and the income expatriate villagers send back from working in oil-rich Brunei. 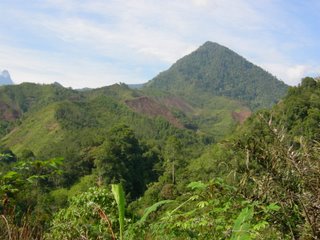 Strung over a bridge and through a fruit plantation, there is a hundred metres of mist net on bamboo poles. Seems the bat-catchers there have been busy, though, with no concerns for the legality or otherwise of their catch – it all tastes the same, I suppose. There are signs up at parts of the river, however, forbidding fishing – enforcement is done by the villagers and the fine is a buffalo or a 1,000 ringgit. They recognise the value of fish conservation for their own future benefit. It’s a start.

We press on to the ranger 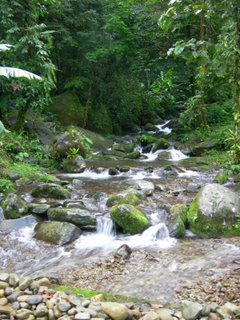 post at Kinabalu-Sayap, the place they call “the other side of the mountain”. When we hit the park boundary, the contrast is startling. It is so easy to recognise the difference between unprotected forest and protected primary forest – and you don’t have to be familiar with a rainforest to see which is healthier.

Inside the forest, the first thing I see is a Bornean Bristlehead flying across the road, one of the region’s rarest and most mysterious endemics, an avifaunal clown that no one knows where to place in the taxonomy, so strange is its anotomy and habits. I wish I’d had a better look. Had I been driving, I would have braked so hard we would all have gone through the windscreen. I’m told by one of the Park folk with us that it is the first record for Sayap.

We are close to 1000m high. Cold water in the bathroom, straight off the mountain. Electricity for a few hours at night by way of a generator. No frig. No phone, not 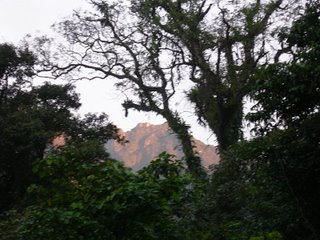 even mobile lines. No internet. No shops. No people but us. And the place is gorgeous with views from the verandah to die for. A river just below us, chattering endlessly over stones, a background sound to whatever we do for the next five days.

Sunrise starts at the top of the hills and sneaks downwards. The mornings are cloudless and hazeless, the afternoons misty or wet as the mountain creates its own weather and then dumps it on us. The evenings are cold as the sunlight creeps upwards to turn Mt Kinabalu red, leaving us below in the valley in the dark, already tucked away for the night.

I go birdwatching. I write. I read. I walk in the forest.
I am rejuvenated.