When we were on “Survivor Island” a couple of weeks back, one of our party had a problem ordering a gin and tonic. There was a bar – widely advertised in the hotel brochure – but alas, it didn’t didn’t live up to expectations… for a start, although they had several different types of gin, there was no tonic. The final insult was when the person concerned ordered a vodka and orange, he got just that. A shot of vodka in a glass, and an orange. Uncut, unpeeled, unsqueezed.

Friend Donna is visiting from downunder which has been great. We talk nonstop, and tell lots of “do-you-remember stories” from Conflux and Worldcon and the Orkneys. Yesterday, I dragged her around Kuala Lumpur on foot – but that’s another story. And then last night we had an incident with a bowl of mushroom soup. It went like this.

Waitress hands us menus, and hovers while we make choices. We order some garlic bread and the drinks; waitress continues to hover, so we turn out attention to the main dishes.

A little while later waiter appears with garlic bread and drinks.
A remarkably short time later, Donna gets her fish. I tell her to start, as there is no sign of my soup.
Donna finishes her fish. We evidently have to take it in turns to eat.
My salad arrives, but no soup.
I shrug and have my salad. We talk and talk, and finally I realise I have finished my salad, and the soup still hasn’t put in an appearance. I mention this to a passing waiter. He seems bemused and speaks to waitress. She comes over, and says to Donna, ‘Oh, you want mushroom soup, too?’
By this time, Donna is convinced there is a conspiracy to poison her with the wild mushroom soup, and I’m convinced there is a conspiracy to keep me from having it.
‘No! No,’ she cries, ‘No mushroom soup!’
At that point I gave up and cancelled the order. ‘No mushoom soup,’ I agree.

Waiters disappear and we start laughing so hard we can hardly talk. 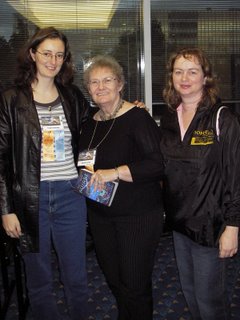 After some coffee, we go to the counter to pay the bill. And there, on the list of items, is one mushroom soup. Donna says, ‘We didn’t get the mushroom soup.’
‘Yes, cancelled,’ says the cashier happily.
‘No,’ says Donna torn between tearing her hair out and disintegrating into a fit of giggles, ‘It’s on the bill…’
And finally, finally, we manage to lay the mushroom soup to rest.

By this time we needed a vodka and orange.

Memories: Worldcon Glasgow 2005 – when Donna and I last met just over a year ago.
(Trudi Canavan, self, Donna)