My husband is a much more intelligent person than I am. Not only does he have a string of letters after his name, but he has also been, at differing times, a University Vice-Chancellor/Rector, the head of two large research establishments, and – for over 6 years – the Deputy-Director of the International Atomic Energy Agency of the UN. Yeah, that’s right, the place that told Bush – quite correctly – that there were no WMD in Iraq. (Why didn’t you ask me, Mr President? I could have told you. I told everyone else who would listen until I was hoarse.…)

Anyway, you don’t get to do any of those things if you aren’t an intelligent fellow. More intelligent than Mr Bush, anyway. So what is it about my husband and washing machines? Every time I went away in years gone by, I’d return to find all his white underwear now either pink, which for some odd reason he found embarrassing, or the most revolting shade of mangrove mud, which I found disgusting. And no amount of conversation about how to wash clothes ever seemed to make much difference.
With the genius of a lateral thinker, he finally gave up buying white underwear.

Now we are living in Sabah and I am flat out with a behind-schedule book, he has been doing his best to help by taking over the washing. And remember that this is an Asian male born aeons ago, whose mother was of a generation that thought (although she herself was much too polite to say so) that I was maltreating her son if I ever asked him to do anything remotely housewifely. Anyway, I have been puzzled as to why, when he does the washing, the laundry floor ends up awash and sometimes the clothes don’t appear to have been rinsed properly. Was there something wrong with the machine, I wondered?

Nope. I have cracked the code. Husband – with all his degrees and his scientific, analytical brain, never reads the labels on the knobs. Or the instructions on the liquid-soap container. He just stuffs in as many clothes as he has and turns the machine on. If it’s really full, he puts in two cups of liquid, even though the instructions call for a maximum of one. Result, the drainage – stuffed up with an excess of bubbles, overflows.

And the lack of rinsing? Well, I change the water levels according to the amount of washing that I do, so if I left it on low, that’s where it stays for him, even when the machine is full. It’s a miracle it hasn’t blown up trying to move bath towels and heavy jungle garb with a water level fixed at low. 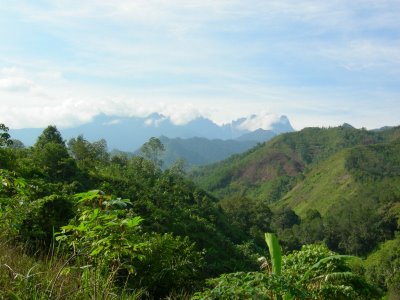 Hanging on the line right now (we don’t use dryers, but sunshine) are two bedsheets. They are striped blue, pink, green and purple. We have no such bedsheets. We have never had such bedsheets. (Are you crazy?)They suddenly appeared in the wash after we came back from the ranger station at Sayap-sayap, Kinabalu Park this last weekend. He brought back the sheets off the beds we were using in the staff quarters. Hello? Can’t a man with a Ph.D. remember what sheets we own? And it’s a three hour 4WD drive journey to return them where they belong…

Ah. Maybe that’s it. It’s all part of a plot to go back there.

Photo taken along the way to Sayap-sayap. Mt Kinabalu from the western aspect, with the infamous Low’s Gully (remember the British Army row?) towards the righthand side of the massive.