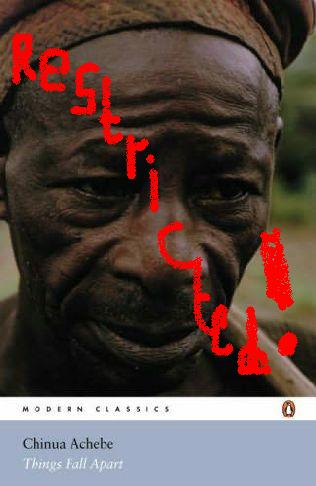 The information in today’s blog (and the pix!) comes from here, (look at the index) – an excellent blog on literary matters by Sharon Bakar, with a heavy bias to things Malaysian. The opinions expressed here are mine, though I suspect Sharon would agree…

Malaysian government book censors have a lovely system going that makes no sense to anyone except themselves. They must be ashamed of what they do, I think, because they appear to try not to actually tell anyone what books they are banning, or why, and they apparently make it very hard for anyone to find out. They don’t even call it censorship, books are just “restricted”. Presumably because you can apply to import a copy for the purposes of research if you have sufficient reason? Aha, perhaps university professors are less inclined to be corrupted by what they read!

The way it often works is like this. A bookseller puts in an order, and then finds out he can’t import the book when the consignment gets stopped at the border.

And what kind of books are they banning? Well, the one pictured above was stopped at the border just recently. Things Fall Apart by Achebe, about Nigeria just before independence in the 1950s. Why? Can anyone guess? I am a bit flummoxed, to be quite honest. Maybe because Christian missionaries are not drawn in a very flattering light?

But then, it is perfectly possible to buy Henry Ford’s bigotted rant against a religious group which is not only much, much nastier but is also dishonest and misleading; The International Jew: the World’s Foremost Problem is often prominently on display at KLIA airport, which surely gives intelligent visitors an unflattering message about Malaysian literary preferences.

The really, really weird thing, though, is that the Achebe work was a school exam textbook here in Malaysia for many many years, up to at least 2001. So five years ago it was considered a proper text for study by young Malaysians. Obviously we have been exposing a group of young Malaysians to damaging influences within our school system. Disgraceful!!

Other books that are restricted include The Malayan Trilogy by Burgess, and Karen Armstrong’s classic scholarly and balanced text The Battle for God: Fundamentalism in Judaism, Islam and Christianity. Oh, and Lady Chatterly’s Lover too – but not, say the Booker Prize winner of a few years ago, The Line of Beauty, which had scenes in it which would have made Lawrence blush.

In fact, most of the banned books are on religious issues. Apparently we mustn’t think about religious matters too much, it’s corrupting. Or maybe the bureaucrats think religion itself is corrupting? Which brings me to the real problem with censorship, and it is this. The moment you start down the road to deciding what people can and cannot read, you end up looking like a right proper idiot. Especially in this day and age where people just order through the internet – or indeed download it.

Censorship? What a waste of taxpayers’ money.