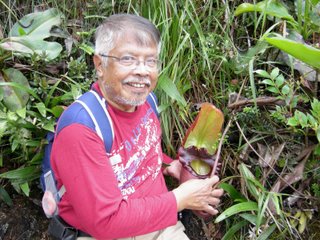 When I lived in Vienna, I was always amused by the way the Austrians – and I guess German society in general – loved titles and used them liberally whenever possible. Professor Doctor X…or was it Doctor Professor X? Can’t remember now. Wives even took the titles of their husbands. My own doctor was married to a doctor, and her nameplate proudly proclaimed Doktor Frau Doktor…

Anyway, I dunno what they would now make of the disreputable fellow in this photo taken last weekend at Mesilau, hugging a pitcher plant Nepenthes raja, (which looks like a small toilet with lid, for an elf with pretensions). He didn’t pick it by the way!

He is a Professor.
He has a (well-earned) Ph.D. in chemistry.
He has a title awarded by the state (Dato’).
He has an honorary D.Litt. awarded by his alma mater in Australia for services to internationalism (he was the Deputy-Director General of the International Atomic Energy Agency for a number of years).
He has another honorary doctorate from the National University of Malaysia (UKM) for his services to the nation and to that university.

And now we have just learned he is about to be awarded a third honorary doctorate, from University Malaysia Sabah (UMS) at the beginning of next month for, I guess, his services in setting up the first campus here in Sabah many years ago.

Syabas, Noramly. I am proud of you.