Prepare for another rant. 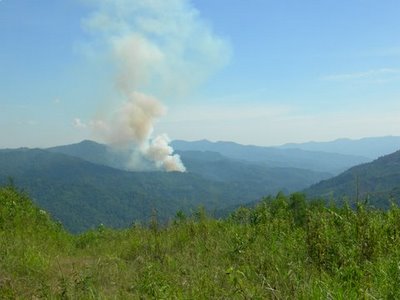 It is illegal to do any open burning in Malaysia. Of course, something being illegal here means very little. It certainly doesn’t necessarily mean you’ll end up fined or jailed. Red lights are – for example – only for motorists, not for pedestrians or motorbikes. And even with cars, it’s optional if there’s not much traffic. Just stand by a set of lights on a quiet Sunday afternoon if you don’t believe me.

‘One way’ street signs have no meaning whatsoever for motorcyclists. In Bandar Baru Bangi, you don’t even have to have a licence to ride a motorbike. Hell, you don’t even have to be big enough to see over the handlebars – and you can take your little sister standing up in front of you and don’t forget little bro – he can hang on behind. You’ve seen Dad do it, so why can’t you, too? Even though you are only twelve. And Dad would never dream of wearing his crash helmet when he goes to the mosque on Fridays. Someone might pinch it while he’s praying.
Besides, a helmet is a pest when there’s a songkok or some other supposedly Islamic headgear on your head. Anyway, God is not going to kill you on your way to prayer and leave your family without an income, is He?

You can protect tigers all you want, but catch a man with one in his frig, and he’ll shrug and say “I didn’t put it there and I know nothing about it” – and he gets a gentle tap on the wrist by the magistrate who’s probably just tried a child molest case and can’t see that a tiger matters one whit. The worst thing that happens to the poacher is the tiger is confiscated. All that lovely money down the drain. Never mind, he can go back and get another. And another and another.

Taxes get paid only by those on salaries who therefore can’t work out a way to run away from them. We start young, showing our kids how to ignore the law. We paint the maximum speed on the back of trucks and buses, just to show how much contempt people have for that law. Dad takes the kids fishing in the lake and sets up next to the sign that says “No Fishing, by order”. Malaysia boleh, you see.

Fishing trawlers cover their boat number and openly trawl close to the coast (not allowed) because catches elsewhere are low. They don’t care that they damage the coastal growth of sea grass. I’ve seen that myself off the coasts of Perak and Johor. Other fishermen poison fish with cyanide and bomb reefs. Take a look at Banggi Island if you don’t believe me. And be very careful about eating fish in Sabah. They can misjudge the amount of cyanide. I could go on and on, just about the things I have seen myself. 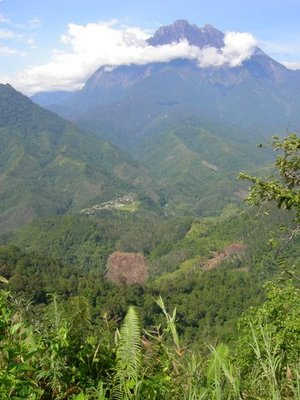 I know how insidious this culture of contempt is – I’ve succumbed at times. I’ve done illegal U-turns, I’ve gone birdwatching (lots of times actually) in forest areas that have signs prohibiting entry. And yet I would never dream of doing it in my country of birth where there would be a penalty. We learn from example, you see.

Here in Malaysia, we carefully raise generation after generation of youngsters who have absolutely no respect for the law and we wonder why they end up drug addicts, or in jail, or prone to road rage.

We took these photographs over the weekend along the road between KK and the Kinabalu National Park. The fires – and there was more than one – are not accidental. They are burning the land deliberately to rid the earth of tropical rainforest. You can see some of those burnt patches in the second photo. Rainforest that could, with careful management, give future generations a living are being trashed on impossibly steep slopes. Just think what happens to the thin topsoil the moment it rains.

Why do they do this? To plant a crop of pineapples. Or hill padi. In three years, the hillside is abandoned because the soil is useless. And they find another slope, another patch of the world’s most glorious biodiversity to destroy forever in exchange for three years of a pittance of an income. The rainforest does not grow back. The hills are a patchwork of weeds now.

Tomorrow I’ll talk about who I blame. And it’s not the farmer.