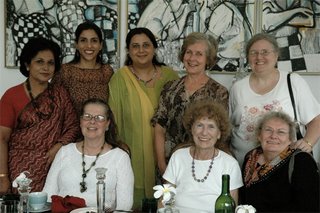 And no, I didn’t mean our collective ages. But this KL group has been going without a break for over 30 years, and one of the members was there at the beginning. There can’t be too many book groups in the world with a record like that. I have been a member for 11 years, and I miss them now that I have moved…but I’ll be back!

There are in the pix – a Sri Lankan, a Malaysian, two Americans, a Frenchwoman, two Australians and an Indian. The photographer [not in the shot] is a Singaporean, and the three missing members are Malaysian, American and British. How’s that for a cultural mix? Ages range from 40 or so to over 80.

We have two art patrons and gallery owners, a mother of quads [yep, you heard], a expert on Islamic jurisprudence, a writer [me], an editor, an ambassador’s wife and several people who volunteer for charities and NGOs.

I miss you guys.