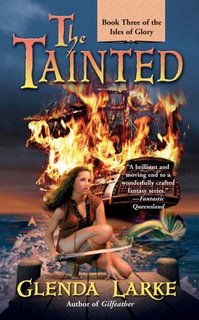 …or better still, in your local speciality bookstore in the US, don’t forget to buy The Tainted.

Yes, that’s right, the last book of The Isles of Glory is now out in the USA. And I promise you, it won’t disappoint. If you haven’t read any of them, why not buy all three? 🙂

[And unlike some, my trilogies are just that, trilogies. They don’t go on forever.]

For those of you who haven’t tried my work, let me say a little about these three books. From the American covers, you’d think they were stories of sort of Amazonian-type pirate swordswomen. They are not really, even though there is plenty of action.

The middle book was, in fact, more the story of a male pacifist physician who got caught up in a battle he really didn’t want, a scientist who suddenly finds himself surrounded by the magic he doesn’t believe in and wants an explanation for. 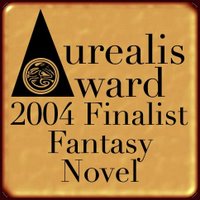 This last book brings all the different elements together and introduces a new character – a tiderider who does exactly that for a living – he rides a bore tide.

The last book also brings the world outside of the Isles into focus, as the writer of the letters and journal that have framed the story arrive on the Isles, and you find out exactly what “The Change” is.

The Tainted, like the first book of the trilogy (The Aware) in 2003, was shortlisted for the best fantasy novel of the year in 2004, Aurealis Awards.

It was also voted by readers – in conjunction with Voyager Books 10th year anniversary in Australia – one of the top ten favourite books of the imprint over the last ten years. Lord of the Rings topped the list, which included other classics such as Fahrenheit 451, Feist’s Magician, Tolkien’s The Hobbit. (As you can imagine, I was staggered to see it on such a list!)

Read an extract here. And a few review quotes here.

So go out and buy it, and then pop over to Amazon and write a review – good or bad!!!!!

Oh, and here’s an interesting fact – I wasn’t asked to check the blurb on the back cover. So there is a rather large factual error about the story there. See if you can spot it.