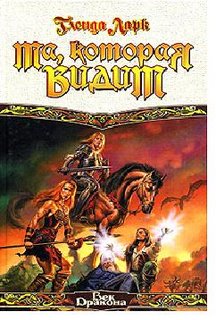 Havenstar was published six or so years ago in Russian translation, and I have only just found out what it was called: Stars of Hope . (Thanks Tsana).

The English version can be bought secondhand for 30 pounds and upwards at the moment, which is a heck of a lot cheaper that what it was selling for in the US recently.

Tsana also tells me that The Aware is called She Who Sees. This is the cover for those who missed it the other day (see below for my comments on 19th March).