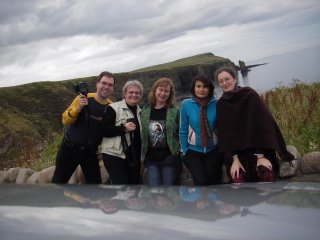 Photo: the Orkneys, Scotland, after Sff Worldcon 2005: from left, Paul Ewins, self, Donna Hanson, my daughter Natasha and Trudi.

Trudi’s work is adult fantasy, but tilted a bit towards the young adult market – don’t expectloads of graphic blood and gore. There’s more angst than grit, but Trudi doesn’t shirk from the depicting tragedy and the high price of victory.

Trudi Canavan’s first trilogy The Black Magician was enormously popular, particularly in Britain, and obviously must have left her fans begging for more because Priestess of the White, the first in her new trilogy, was the third most pre-ordered book on amazon.co.uk. It went on to be number one in the SF hardbacks national bestseller chart and number 5 in the national general hardback fiction charts immediately after publication this month.

What can I say about Trudi? She loves chocolate and fudge and ice-cream and never seems to put on weight. I visited an awful lot of knitting shops when I travelled with her and the sound of her knitting needles was a constant in the car. Her Pippi Longstrom socks were a hoot. She cooks a mean Anzac biscuit without a recipe, and plays an even meaner game of Scrabble. (I’m never going to play with her again.)

And if you ever invite her to speak anywhere, make sure you have the mike turned up high, because she speaks very softly…