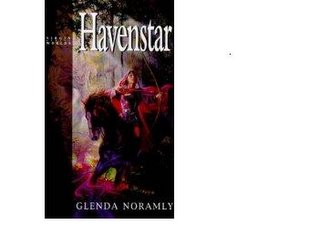 …the only trouble is that it is not making money for me!

On Amazon.co.uk the secondhand price is now a whopping big 163.07 pounds sterling for one copy. (Are they mad?) Never mind, someone has it on sale for a much cheaper at 33.32 . Not happy with those prices? Pop over to Amazon.com. You can get one for $US101.

For those not in the know – Havenstar was published (under my married name) in 1999 by an sff imprint for Virgin that quickly went under, just as my book was hitting the bestseller lists on Amazon. The day it hit 81 on the top 100 list, it became unavailable as the publisher had already remaindered it. I, alas, had only two copies myself. Although I had emailed the publisher, asking to buy 100 copies, they never answered. (I guess everyone had already abandoned the sinking ship.)

Another author who has suffered a similar fate is Marcus Herniman . His Arrandin trilogy was published by Earthlight, which has also ceased publication. Book One is selling for 58 pounds upwards.

In the publishing industry such stories are common enough and you’ve just got to pick yourself up and carry on…but, oh boy, how I wish there was a law that gave me a slice of the secondhand cake.