After four days of teeth-grinding frustration trying to make an online booking to New York, I made a second attempt at a local travel agent – the only one in my area registered for the ongoing MAS cheap travel fair.

I walked in and was utterly delighted to find that this time, yes, they could give me the dates I wanted at a price I thought was brilliant, considering what else I had been offered. I didn’t even think about it. “I’ll take it,” I said. I couldn’t believe my luck. Huh. I might have known it was too good to be true. When it comes to getting to New York cheap, I am jinxed. Or maybe I should reword that: I am a jinx.

Immediately after I said “I’ll take it” – words with far reaching consequences when uttered by the magically jinxed – every piece of electronic equipment in the agency blew up. That was, need I say, before my purchase was entered into the system.

I kid you not. The lights went out. Computers, monitors, fax machines and printers all went “PHHHUTTT!!” and smoke poured out of everything. I left before anyone found out I was to blame.

I decided to take Liz’s advice, and off I went to the central railway station where there is a MAS office. I decided to avoid the KL traffic horror by catching the commuter train. So I stuffed my copy of The Dante Club by Matthew Pearl into my bag and off I went.

I sat on the station and watched several trains going the other way on the other side of the tracks – but nothing going to KL. The electronic sign above my head uttered a continuous stream of make-believe : (train due in 6 minutes …5 …4 …3 …2 …1 …30 …) Finally, just when it seemed no more people could fit on the platform, a train did appear. On the other side of the tracks, but going to KL. It horned. A hundred or so people exchanged glances and wondered whether we were supposed to cross the overhead bridge and risk getting on to a train going north on the southbound line…

Anyway, there we all are on a train, going the right way but on the wrong tracks, packed in like brown rice in a vacuum pack – when it becomes increasingly obvious that the aircon is not working. And there’s no way to open any windows. It is just past midday in the tropics. And I am reading a book that vividly describes various ways of being murdered a la Dante’s Inferno. Talk about surreal.

It is two hours later by the time I finally arrive at my turn at the MAS desk. And was there any sign of that cheap seat the travel agent had mentioned? Nope, of course not. 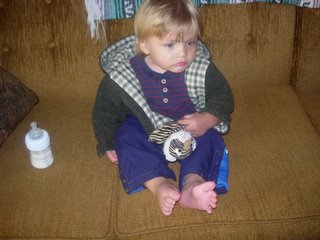 In the end I was just so tired of wasting so much time on this whole booking thingy, that I bought a ticket (supposedly bargain price) which was just $RM 52.00 cheaper than the regular economy MAS fare. At least the computers didn’t blow up.

I am going to New York. Well, to Virginia actually. To see the little guy above. And I refuse to think how much I am paying to do so…I am sure he will be worth it.